Food forest, permaculture, polyculture, sustainable agriculture and Climate Farming™. Not your everyday terminology when you think of the typical gardener or small, organic, hobby farmer. However, the team at  Johnny Appleseed Organic™ aims to change that. They are working to put these lesser known practices that promote regenerative agriculture and support clean energy into play at their farming village under development in Folkston, Georgia.

Nestled in the Okefenokee Wildlife Refuge, Johnny Appleseed Organic has begun the process of transitioning the existing, traditional farm to a sustainable, residential teaching village pioneering Climate Farming. On this day I am trying to digest all the head-spinning information being shared with me by Head Climate Farmer Joshua Andersen, Horticulturalist Mikael Maynard and Communications Director Charles Goodin.

Their passion for what they are doing, and desire to share with and educate others, is electric. The reason for the conversation began with their desire to talk about their involvement in OREMC’s Cooperative Solar program to power their operations. I understood as organic farmers their pursuit of green energy. What I was about to learn was the climate farming model goes so far beyond being organic—it sequesters carbon emissions, improves the environment and enriches the soil.

Josh explains that their initial focus is to improve the fertility of the soil by planting the right kind of trees and plants that will naturally enhance the topsoil through abscission—the natural shredding of leaves, nuts, flowers or seeds — and allowing it to decompose. This mimics what naturally happens in a forest; each layer (i.e. top or emergent layer, canopy, understory, shrub layer and ground cover) has a role in “feeding” the other layers for the overall health of the whole forest. The same is true with Johnny Appleseed’s syntropic or permaculture approach.

To further explain, Josh referenced his time in Jordan at the Greening of the Desert Project, where he became a student of permaculture design under Geoff Lawton, a world-renowned permaculture consultant. He suggested I Google it and I did. What I found is extraordinary.

In the Dead Sea Valley, 400 feet below sea level, is a river of lush, green vegetation growing out of what otherwise seems to be a barren, rock desert slope. It is a closed loop, self-sustaining system, meaning it feeds and nourishes itself. Each plant and tree has a purpose: some provide soil hydration; some are for shade so other plants can grow and thrive to provide nitrogen for food; while still others are harvested for “chop and drop” natural mulching to help retain moisture in the root system of trees. No chemical pesticides, herbicides or fertilizer.

Shifting the focus back to Folkston, this is the vision for Johnny Appleseed, to establish a food forest through the implementation of a blend of regenerative, syntropic and permaculture best practices. First coined by Bill Mollison—an Australian biologist credited with developing the theory and practice of permaculture— permaculture is literally “conscious design and maintenance of agriculturally productive systems that are holistic and live in harmony with nature.”

So, what might one expect to find growing at Johnny Appleseed? From the ground up and using all heirloom seeds, the goal is to start with eggplants, sweet potato, blueberries, blackberries, olives, turmeric, persimmons, pears, mulberries, figs, pecan, cabbage palm and eucalyptus trees. They are also a testing ground for lesser known varietals as well, such as tigger melon, lemon cucumbers and bitter melon. Then, add in chickens, turkeys and pigs — not for food, but to take advantage of the natural byproducts of their existence: fertilizer, tilling and aeration. 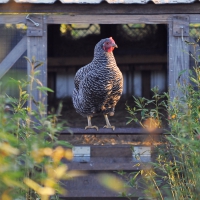 “The animals provide a very symbiotic relationship,” says Mikael. “They help prepare and maintain the health of the soil from which the trees and plants grow, which in turn yields natural feed for the animals.”

Josh adds, “So much of what we do here is above and beyond farming. It is about supporting our environment, promoting clean eating and using the land and resources in the best way possible to promote the health of the planet and ourselves.”

Which brings us back to how our conversation got started . . .OREMC’s Cooperative Solar program. “Meticulously ethical,” is how Charles describes the farm’s overall operations. They investigated installing solar on the farm itself, but found it would be extremely costly, take away acreage for farm production and could be unpredictable due to weather. They also had concerns about the use of batteries for storage.

“When we heard about the Cooperative Solar program — being able to subscribe to blocks of power — it was a practical alternative that philosophically fit with our mission,” Charles explains. “It was an easy decision to make to become a subscriber.”

It is a circle of life. That is my biggest take away from discussion with Josh, Mikael and Charles at Johnny Appleseed Organic.  At the root of it all, and in its most natural state, a food forest not only feeds itself, but humans and animals alike, by the very fruits of its labor to survive and thrive.